Road to 1.0: The Draft gets some much needed…

While the amateur draft is an important milestone in every OOTP baseball season, the draft is arguably THE most important event in the game of fantasy baseball. While rosters change and evolve over the course of a fantasy season, the draft is where every team owners hope to land those cornerstone players who will drive their team through the season and lay the groundwork for a successful run to the fantasy championships.

As such, the draft has been one of the areas that have the most potential for success and has generated more than its fair share of headaches for me while coding the fantasy mod. While I didn’t actually plan to throw much time at it in the 0.5 release (due to plans I’ve been drawing for a new Live Draft feature down the road), I was forced to put some development time into improving the experience and fixing some serious flaws based on feedback during the beta.

Here’s a rundown of what’s happened to the Draft process for 0.5.

Two new dialogs have been added for league commissioners. 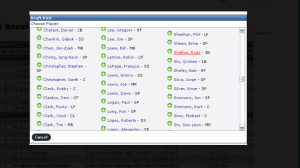 This gives commissioner’s a lot more control over their auto picking selection(s) and should put an end to the dreaded “auto-pick all” bug (a legacy bug that affected the original StatsLab code that was the basis for this feature as well).

The fantasy draft is a very important event in any fantasy game and in 0.5 beta it’s received some well-deserved attention and some major improvements.