In the beginning, there was a fantasy mod. It has users and it had fantasy leagues (that all contained teams). Each league is appointed a commissioner when it is created (by default the user creating it). But how, then, do other users take ownership of the remaining teams?

From 0.1 up through 0.3, the only way was for the league commissioner to go into the League Administration page and send manual invitations to anyone they wanted to join the league via the team editor page. Those receiving invites could choose to accept and take ownership of the team or decline. Anyone who was not yet a member of the site would be required to sign up first and then they were free to participate. 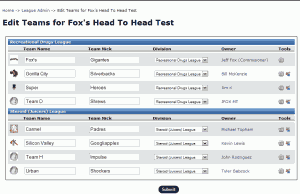 But what if someone was interested in joining a public (or better, yet private) league that had openings but was not friendly with the commissioner enough to score an invite?

Version 0.5 solves this issue with a brand new feature, the public team finder, and request pages.

One big change that is easily noticed in 0.5 is the new “Leagues” item in the fantasy menu, which has changed from a static link to a drop-down menu. The menu contains two links:

New to 0.5, this page is only available to registered users who are signed into the site and will display leagues that have:

Clicking “Request a team” for any league listed here brings the user to a page listing the open teams and lets them choose which team to put in a request form and submit it to the league commissioner. Once submitted, the commissioner can accept or decline the request. 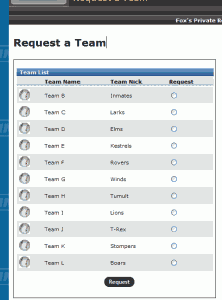 Commissioners have had the ability to view their pending team invitations since version 1.0 in the League Administration panel. In 0.5 this has been expanded to now also display pending public team requests. Commissioners can accept or deny request right from this list. 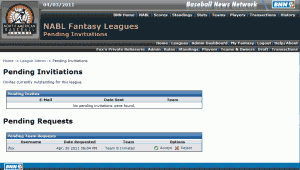 Users also have a way to track their team requests and initiation. On the main user profile page, a new toolbox displays when the user has outstanding requests or invitations. The same as commissioners, they can accept or decline invitations or retract team requests if they so choose. 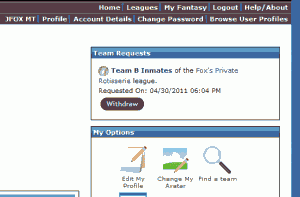 With 0.5 beta, finding a team and taking control of the options to join a league have gotten more robust. It’s the best time yet to download and try the mod out for yourself.

I planned to release 0.3 beta (patch #3) tomorrow morning, but I’ve had a quick last-minute shift in idea.

I have some overarching stuff I want to do with the mod (and more specifically to the CodeIgniter extensions that form the foundation of the mod), and I don’t want to keep putting off jumping into them.

So I plan to add two last enchantments to the mod, a league schedule editor (in progress), and a scoring period editor (requested by peba commissioner Corsairs). I feel these two additions will at least let online league owners run some fantasy season while the mod is in beta and I can then turn my focus from the mod and onto the larger items I want to hit.

In the short term, this is likely to irk a few folks who have trade support, rotisserie scoring support, and some of the other goodies on their must-have list. The long term benefit, however, to both the source code and the end-users are substantial for me to feel this is a justified move.

I’ll be making notes of and discussing the progress of this shift in direction over the coming months. As for patch #3, I’m hoping I could have a version out by Wednesday or Thursday, but most likely another ten days from now. So stay tuned.

Second Patch is in the works

So were are at 0.1 beta release day +3 and a few glaring shortcomings have come up rather quickly. In addition to the missing tables bug found by Corsairs Wednesday which promoted a quick first patch to be released, I also found a couple of other minor cosmetic issues that I addressed.

I also found that as the mod gets updated, there is going to need to be a way for league owners to upgrade without having to replace all the league files and re-run the installer. So for the second patch, I am working on a system to update both the database with any changes needed as well as three of the core CodeIgniter config files that contain custom league data.

The process is pretty easy. I’m just replicating the same steps I take in the installer, just using *_upgrade.php files instead of *_install.php and using the information already in the global config files. Pretty easy as they’re all constants. The one pain is that to get this system installed and running is going to require anyone using 0.1 or 0.1.1 to make a manual change to their constants.php file. No biggie, though. It’s just a couple of lines.

Corsairs had a good suggestion for functionality regarding required database files and pointed out some bugs in the individual table loading page which will also be addressed.

I need to make sure this new upgrade process is going smoothly before patch #2 comes out, but it will likely be by or before Wednesday. So stay tuned.

Have you downloaded the mod and are giving it a try? Drop a note and let me know and give me your thoughts about it thus far.

Of course, as I’m doing my final checks and run through I found a big scheduling bug in the league model that has to be fixed before this goes out because it will come back as a bug pretty quickly. So I’m working to fix that ASAP then I will start to bundle the release. Stay Tuned.

Tomorrow is the big day—the public release of the 0.1 beta of the OOTP Fantasy Leagues. The last post was a review of what’s included in the first release and screengrabs of many of the tools. Today, we’re going to talk about another significant facet, the road still ahead.

While the 0.1 beta release is feature complete for what I wanted to accomplish, there is still a lot that is on the list of what I’d like to fold into the mod eventually. As anyone can attest to, it’s just a matter of time and energy.

I plan to release the mod source code to Google Code to help open it up to collaborative efforts from other coders out there. Since the mod is based on both MVC and the open-source CodeIgniter platform, I hope people find it easy to learn the code and find ways to customize it to their liking. All I ask is that if you add something cool or useful, please post it back to the Contributions forum on our board.

I’m open to suggestions for new features as well. Thanks to the members of the PEBA for all their guidance and contributions to this list thus far.

What is a better way to describe what’s in the OOTP Fantasy Leagues 0.1 beta release than just simply to show some of its features via screengrabs? We all love screengrabs, right? I know I do. Keep in mind, this is just a small sampling of the elements in the mod, and there’s still more planned. Come back tomorrow for the final introductory Road to 1.0 article: What’s yet to come.

In the meantime, enjoy the screen grabs.

As the OOTP Fantasy Leagues 1.0 release date nears, I thought a couple of articles akin to OOTP’s “Road to Release” would be a fun intro to the Mod.  So in that spirit, here is Road to 1.0 number one, The Feature List.

Next up, some screen grabs. Stay Tuned.

I am very excited about the upcoming release of the first public beta version of OOTP Fantasy Leagues. What started as a custom two-page addition to Frank Esselink’s StatsLab mod has morphed into its own unique and challenging animal of a project. It’s one of my most ambitious personal development projects I’ve ever attempted, and I’ve tried a few.

What will the public 0.1 beta entail? I will release the code for interested users to download and install on their servers and then pretty much wait for the bugs and feedback to start rolling in. At this point and time, the site is feature complete for what I want in the 0.1 release, so I won’t be adding much, if anything, to the 1.0 final release. Just clean up what is there already if need be. For what I wanted to do and could accomplish time-wise this summer, I am delighted with the feature list thus far.

Working with John Rodriguez (Corsairs in the OOTP Forums) and the rest of the private BEBA and OOTP beta team gave me the chance to test drive the site, and it’s features and get some critical feedback from real users on what they’d need to use the mod daily. What we worked out and added to the 0.1 release adds, in my mind, at least, the most critical and vital scouting and management tools that are necessary for people to start enjoying this with their online leagues.

My ultimate hope and goal here is that the mod adds a new dimension of immersion and just plain fun to the running of the OOTP online league for their commissioners.

I already have a long list of possible additions. One might ask, though, why would you want to try and move this project from hobbyist work to full out development and release all within working and having a third child (which is in itself a full-time job sometimes too). Well, I guess it’s just in my nature to want to express myself. Anything that helps promote and can help to benefit a game that has given me many hours of fun and challenging distraction from life little complexities is well worth the effort to me.