This is the second to last Road To 1.0 development blog entry. It’s been a long road to get to the final release, but the final 1.0 version is coming this Monday September 26, 2011.

No sooner did I finish work on the 0.5 beta release and draft up a blog post regarding user management changes (and shortcomings in the workflow) than I queued and executed a couple of big updates to user management. I’m excited to say that some of the most glaring shortcomings have finally been addressed and the mod is now even better than ever.

Up until now, if a site administrator wanted to manage a users account details or remove them, they had to do so manually in the database. This is OK for people like me who know their way around phpMyAdmin and a database, but for the average site admin with limited technical knowledge, that’s a pretty big (not to mention scary) leap to take. A less imposing way to see a list of site members was to use the link from the “My profile” page, but how many admin’s would go there to find members? (Especially since I never documented that in the admin guide, whoops).

So for 1.0.6Release Candidate 1, there are several additions to help solve these issues. So let’s take a quick look! 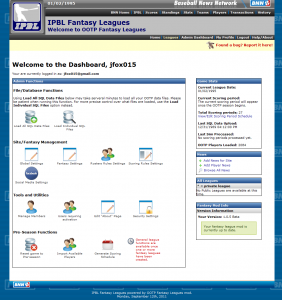 New to the Admin Dashboard is the Tools & Utilities section. This features the existing “users requiring activation” tool as well as the new Edit About Page tool. It also sees the addition of two new user-specific tools as well:

The public profiles list has been “cleaned up” so to speak as only active users will be displayed in this list now. This is to cut down on possible attempts by users to join but never activate and spam search engines with URLs and bogus email addresses in their profiles. A big bug that caused any two-digit or higher user id’s to not display has also been squashed.

For the majority of the beta, making login mistakes didn’t come with a penalty. The locked user status has now been completely connected meaning if a user goes over the set # of failed login attempts, their account is locked and they will not be able to access the site. The site admin must unlock their account in the member manager for it to be available again.

Although not a complete rebuild or rewrite, user management gets a significant boost and closes the loop on some of the most “must-have” tools needed by site admins. Download the mod and try out your own fantasy league today to see them in action.

Notes on the change from Patch #4 to Release Candidate 1

Patch #4 (version 0.6) was supposed to be released Wednesday August 31. Due to Hurricane Irene and related power and internet access related issues, this release had to be canceled.

While the final 1.0 code was set to be released on September 12, 2011, the first Release Candidate, OOTP Fantasy leagues RC 1, will be released on this day instead. This is so that beta testing on the season aspect of the mod, encompassing the rotisserie and trade features, can be completed as planned.