One of the most important aspects of a site like the Fantasy mod is the organization and administration of its members. Unfortunately, the mod has historically been light in this area and it was done so on purpose.

The fantasy mod, like its predecessor/sister development project, The Comic Rack, utilizes a CodeIgniter mod called Redux Authentication 2 by Mathew Davies as the backbone of its user authentication and management workflow. It is a trim, clean mod that I reworked for my own purposes and integrated into my own custom MVC CRUD (Create, read, update, delete) workflow.

Davies built his mod off other previous incarnations of the Auth library and while good, it hasn’t received much work in recent years. A new project, called Ion-Auth has sprung up of late to continue building on the library until such as time as CodeIgniter itself includes authentication support (if that ever happens). Upgrading to and incorporating Ion-Auth has been a goal since the 0.3 update, but since it requires me to rework much of the current user workflow, I’ve held off making a move in that direction thus far. When such a time comes that I am ready to rebuild the site backbone (upgrading to CodeIgniter Reactor for example), that will be a perfect time to undertake that effort and revamp the entire Auth system.

At its core, Redux Auth supported some nice things that attracted me to it:

Despite some of the most glaring weak points (lack of “Remember Login” feature, inefficient messaging workflow, lack of an admin tool to manage users), the mod worked for what I’ve needed it to do, simple user management.

Bumps in the road

At the beginning of beta testing 0.5, the beta team quickly started poking holes in what I thought was an otherwise complete user administration system. Thanks to their testing, I was forced to acknowledge and fix the following issues:

In the beginning of beta testing 0.5, the beta team quickly started poking holes in what I thought was an otherwise complete user administration system. Thanks to their testing, I was forced to acknowledge and fix the following issues: 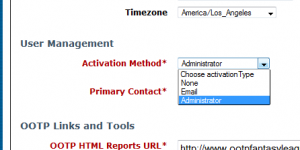 Beta testing on these changes went very well and user activation is now finally ready for prime time in 0.5.

Is user administration complete yet? Well, in the web world, nothing is ever “complete”, but it’s vastly improved. Some features that have been long requested, such as persistent logins, groups, friends, and personal control panels are on the list of planned enhancements, but likely not expected until a 2.0 release at the earliest.

But that doesn’t mean work has stopped. See the follow up to this post, Road to 1.0: User Management Upgrades, Part 2. Changes in 0.6! for a list of further user management changes in the fourth patch release.